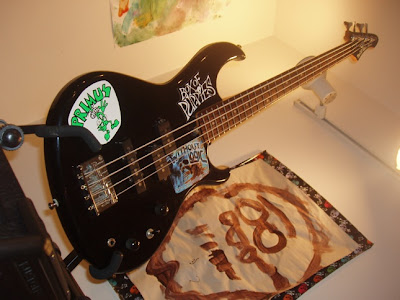 So here is the device that started it all.  It was somewhere around 1992 when I bought this bass in a local music store.  It was used. It was cheap - or at least the cheapest one they had available ($129).  It was a bass.  That was all I knew about it at the time. I picked it up so a friend and I could hack out metal songs, playing along with tracks on a CD player.  High tech.  This was really before the internet, so we were limited to whatever tabs we could find in guitar magazines.  God it seems like the Dark Ages. We messed around for a while, he moved away and the old Cat got mothballed for a decade and a half.  I guess I always had some kind of dormant interest in playing again, because I never got rid of it.  Coming back to playing probably had a lot to do with the internet.  The availability of tabs, cover videos on YouTube, online stores making every kind of gear available - how could you not be in a band if you loved music?

That's the history.  Here's the nuts and bolts:

Aria is a Japanese outfit that actually makes some pretty respectable gear.  Cliff Burton is a bassist you may know who used an Aria Pro II (not a Cat) until he died in 1986 and took Metallica with him to the grave.  The Cat was only produced in 1986-87, and I guess was to Aria what Squier is to Fender.  Kind of cool that this one is still rocking after 25 years.

Mine has passive pickups, pickup selector, tone and volume knobs. Personally, I like to crank the tone up high and use the neck pickups to emphasize the pick sound, which I really dig.  I use Ernie Ball Regular Slinky strings on it because I like their brightness.  It has a great neck, too.  Something about the profile or finish just makes it really nice to play.  The action was super high when I got it, but its got a good functional bridge and easily accessible truss rod, so that was easy enough to take care of.

If I had any complaint with it, it would be the fact that it hums when its at rest.  Not loud, but enough to not be perfectly silent. The Cat's sustain isn't the greatest - and gets worse if you use a noise gate to cancel out the hum.  These two issues were what I looked to address when I went shopping for my latest bass, but thats for another review.

So why review a 25 year old guitar?  Well, for one thing, they are still out there.  They pop up on eBay every now and again.  If you're in the market for a cheap bass and can pick one up for $100, I think you'd be well served.  I've played the Squier super cheap entry model and it definitely doesn't feel as substantial as The Cat.  Plus, I kind of like giving used things a new home.  So if you get a chance to check one out or see one at a flea market, I think they're a solid entry level bass. 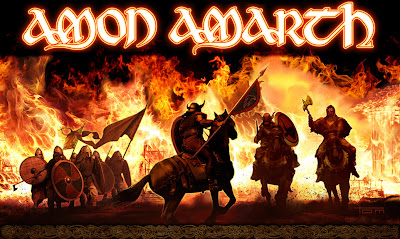 I am easily distracted.  Surtur Rising just arrived in the mail yesterday.  Its the latest offering from my favorite band, Amon Amarth, and it's not officially due for release until Tuesday.  Its been a busy weekend, so I haven't had time to give it a thorough listening to, but just first impression it seems like a strong album. The song "Slaves of Fear" is one track thats really stuck in my head at the moment.  It has a killer verse riff, and the lyrics could have been off of The Resistance.  Thats about as far of a departure as there is from their normal viking fare theme wise, but hey, it is Amon Amarth.

I think they have the album streaming on their web site, so if you aren't down with Amon, check them out. They're touring the US this spring, and word is that its going to be just them - no opening acts.  Just a couple hours of viking death metal from the masters. I saw them in concert on their last tour and they have a great live show.
Posted by Bass Bottom Feeder at 9:30 PM No comments:

This is not a fishing blog.

So I play bass.  I'm in a band.  I'm competent, but definitely not great.  I guess I would consider the whole thing a notch above a hobby.  And like all hobbies and pass times, getting new stuff is one of the fun parts. Thats where I kind of consider myself a bottom feeder, hence the blog name.

Hopefully this won't get mixed up with blogs about fly fishing...

Anyway, what I felt like doing was gradually reviewing my gear for any other current or aspiring bassists operating on a shoestring budget.  Over time, you may end up with a ten-thousand pound pile of shoestrings, kind of like I did.

I'm sure at some point I'll talk about home recording, death metal, politics or anything else that comes to mind.  But first up for discussion will be my personal flagship: an Aria Pro II "The Cat" Bass.

Check back soon.
Posted by Bass Bottom Feeder at 8:53 PM No comments: