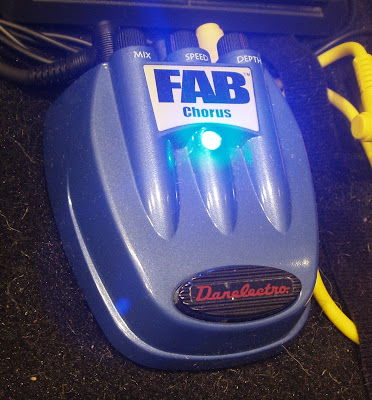 The FAB line of pedals are cheap.  Like $15 cheap brand new.  These pedals are plastic, which shouldn't be a surprise.  The actual pedal part is the black pad that says "Danelectro" on it.  They have a kind of cool 50's retro look to them, but functionally they sort of suck.  As you can see in the picture, the knobs are mounted into the back of the pedal, instead on the face. The indicator marks are red lines on black knobs, which means they are basically invisible, even in good light.  White lines would have helped, and I guess you could paint them on yourself.  There is a reason why every other pedal in the world mounts its control knobs on the top surface of the pedal and uses high contrast markings.  It makes them easier to use, especially in the less than stellar lighting situations you might find yourself in at a gig.  The cable inputs also don't have a real solid "this-cable-is-definitely-plugged-in" feel to them, though they seem to work just fine.

Now the good stuff.  I like the super bright omni-directional led that indicates the pedal is on, and most importantly it actually sounds pretty decent.  The FAB line aren't specifically made for bass, but they don't seem to cut out any of the low frequency signal.  The three controls are Mix, Speed and Depth.  The Mix knob controls the how much of the chorus signal is added to the dry signal.  The Speed control is like a vibrato control almost, and really depends on how you set the Depth.  If you max out the Speed and Depth it sounds like a horror movie organ.

My band is currently a one guitar outfit, so I use the chorus during guitar solos and parts where you might normally have a second guitar helping you fill out the sound.  The setting I use is full Mix, Depth set midway and Speed between midway and max.  Like I said, since the knobs are mounted weird, its hard to describe.   I actually considered tearing the pedal apart and mounting all of the components in a new housing and in a more conventional way.  It sounds good enough to be worth the experiment, and if I screw it up, I'm only out fifteen bucks.  I recently won a BOSS CEB-3 Bass Chorus off of eBay.  Once that shows up, it might be chop up the FAB Chorus time.
Posted by Bass Bottom Feeder at 5:59 PM