Two weeks with no posts.  Not my intention, but I kind of got busy then went on vacation.  What better way to celebrate my triumphant return from a fortnight hiatus than with a song that is about two weeks long.  Be'Lakor is an Australian band that a friend of mine got me into and they have everything I love about death metal in spades.  Check out some of their other tunes if you like this one. Hats off to whoever took this video, because the quality is pretty incredible.  Cheers!
Posted by Bass Bottom Feeder at 10:17 AM 2 comments:


I like Static-X, and this video in particular, which is from their 2007 album, Cannibal.  I can definitely appreciate the fact that they can have some fun with their music.  Metal and roller derby seem to go together like peanut butter and jelly.  And if you aren't from the US and/or aren't familiar with peanut butter and jelly, trust me, they go together.  Have a great weekend!
Posted by Bass Bottom Feeder at 9:30 AM No comments: 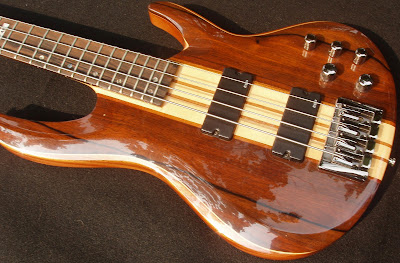 A number of things that I mentioned in earlier posts lead me to the ESP LTD B-4E.  My Cat Bass hums and has weak sustain.  My Tradition doesn't hum as bad, but the sustain isn't much better than the Cat. So I did some looking around to try and see what to look for in an instrument that would address those issues.  The fact that B-4E looks incredible and growls like a menstruating tiger is just icing on the cake!

HUM:
Single coil pickups (and cheap ones probably more so) have a tendency to hum.  If you care about pickups that much, you can read about them here.  Sparing you a history lesson and technical mumbo jumbo, it turns out they invented a kind of pickup that is coiled in such a way to cancel out the hum that comes along with being surrounded by electricity and ambient background magnetic fields. This type of pickup is called a humbucker.  Unlike my other two basses, the ESP has 2 humbucker type pickups.  When it is plugged in and I don't have any inherently noisy distortion on, it is silent.  No noise.  Hum problem solved.

SUSTAIN:
There are several things that can help improve sustain.  Active electronics tend to be better than passive for sustain.  Neck through body design, as opposed to a bolt on neck helps too.  Being able to string through the body instead of just from the bridge is also supposed to be beneficial.  As far as sustain goes, the B-4E has all the features that would work to enhance it.  Compared to my other two basses, the ESP can hold a note 50% longer.  The fact that it doesn't hum means that even as the note tapers off, it won't be overtaken by noise.  More sustain equals winning.

Did I mention it looks awesome?  Pictures don't do it justice.  The neck and overall feel of the thing are great.  The controls cover a very wide variety of tones, with a low, mid and high EQ, pickup balance and of course volume.  You can check out the other technical stuff here.  Suffice it so say, the B-4E is my best bass hands down.  I spent a long time figuring out what I wanted, and was ready to drop $499 at Musicians Friend for just the bass.  It retails (whatever that means nowadays) for $713 and the case was an additional $125.  It just so happened that before I pulled the trigger on Musicians Friend, I popped over to eBay, and lo and behold some dude was selling one with the case for $375 shipped.  A day that will live in bottom feeding infamy!  I have to admit I was skeptical about how much better it would sound than my other el cheapo basses.  The answer is: way better.

That concludes my (current) collection of basses.  I still have two amps, my last couple of pedals, and some recording gear to blab about, so check back soon.
Posted by Bass Bottom Feeder at 8:39 PM 4 comments:


I think this will be the last in my unintentional female-fronted band theme.  I originally encountered the Dead Weather on Rock Band 2, and ended up picking up their album Horehound because of those three songs.  I'm not an especially big Jack White fan, but Alison Mosshart has an incredible voice.  Plus this video is just fantastic in it's simplicity.  Rock!
Posted by Bass Bottom Feeder at 10:05 AM No comments: 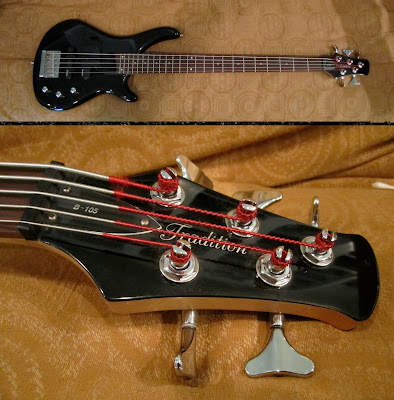 I've talked a lot over the past couple months about pedals, and I thought it was time to get back to an axe.  I am definitely a metal guy, and metal - at least modern metal - means down-tuning.  So a couple years ago I got a 5-string to mess around with.  I checked Craigslist and a guy ten minutes from my house had a 5-string for sale.  I wasn't familiar with Tradition at the time, but I looked them up online:  retail was $525, and this guy was asking $200.  So I bought it and had it set up at a local guitar shop.

I learned a lot with this bass.  Most importantly, I learned I don't really like 5-strings.  The neck just seems too wide and annoying.  I think if I end up actively playing more down-tuned music, I'll look into getting a four string tuned BEAD.  I also don't think I'm too wild about the GHS Bass Boomers the shop strung it up with.  They're too boomy.  Go figure.  A friend of mine works at Gore and hooked me up with a set of Elixirs, which I will string this thing up with some point and see if I like them better.  But all that is more about my personal preferences and not so much about this particular bass.

Quick features rundown:  Its got passive pick-ups and a bolt-on neck.  It's got three controls that are described as separate volume controls for each pick-up, but I don't think that is correct.  I think a more accurate description is two volume controls (the two closest to the neck) and a tone control (by the bridge).  I just mess around with them until I dial in a sound I like and go from there.  I didn't set this one up myself, but it has standard style bridge that is easy to adjust.  The pickups are definitely punchy and I think it has a good sound.  The lowest notes are all distinct and you can get a good variety of tones with the onboard controls.

As much as I like my Cat Bass, I think the B-105 was a step up in overall quality.  It doesn't hum at rest, though it does have sustain issues.  After buying the Tradition and playing with it for a while it helped solidify in my mind what I was looking for in a bass.  That will bring me to the current flagship of my bass fleet, the ESP LTD B-4E, which I will review next.
Posted by Bass Bottom Feeder at 5:22 PM 2 comments: