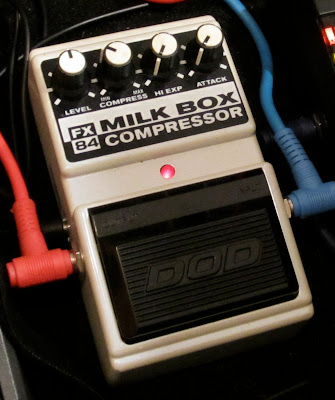 I think compressors are one of the most arcane effects.  What they do is make the volume of your signal more consistent: quieter things are louder, louder things are quieter.  Its something you don't really need, and you can also have too much of it.  But I wanted to see for myself what effect it could have on live sound, so I decided to buy one.

I started out this pedal board project using an article by Bryan Beller from Bass Player magazine as my reference and guide.  It's worth reading and watching the video.  He had this to say about compressors in general:

"... your signal is passing through a bunch of little boxes.  There will be some minimal tone degradation and maybe a slight loss of gain.  Using a good, moderately-adjusted pedal compressor at the end of the chain will squeeze and boost your tone back to life. For anyone with a healthy pedalboard, I would leave it on all the time."

Fair enough.  So if the bassist for Dethklok thinks its a good idea, I'll give it a try.  I read an absolute ass-ton of stuff about compression and compressors.  In the end, I found that the site Ovnilab Compressor Reviews was the single most exhaustive source of information.  In addition, it is targeted specifically at compression for bass.  It will live forever in my link tab.  Though not specifically designed for bass, as far as inexpensive pedal compressors go, it seems the DOD Milk Box can't be beat.  One trip to eBay and $40 later I owned one.

It is hard to really explain exactly what a compressor does to your sound, but Onvilab had this to say about the FX84.  I have it at the end of my signal chain, and I leave it on all the time.  You don't really notice it doing anything until you turn it off.  It just adds a little bit of extra grunt that I guess you only get from compression.  You can check out a PDF of the Milk Box manual here for more info.  I wasn't really too keen on any of their demo settings from the manual.  I ended up just spending some time playing with the knobs until I found a sweet spot - not so much that it sounded weird, but enough to bring that extra punch.  If you find yourself wanting to experiment with compressors, it would be hard to argue with the FX84 as a solid yet inexpensive pedal to try out.
Posted by Bass Bottom Feeder at 8:09 PM