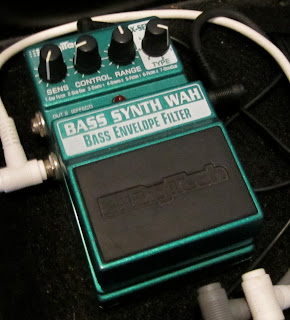 This was my most recent pedal purchase.  I wanted some kind of envelope filter to play around with, and the DigiTech Bass Synth Wah was highly recommended as an inexpensive and decent sounding envelope filter effect.  Even though it is a stomp box type pedal, I would say it borders on being a multi-effect pedal with a synth tone focus.

I got the pedal used off of eBay and found a PDF of the manual here.  The Type knob on the right lets you select from one of seven different synth effects: envelope filter, sub envelope, synth 1, synth 2, filter 1, filter 2 and sub-octave.  Then the Sense, Control and Range knobs set the parameters of each effect, but may control different things depending which effect is currently active.  The manual has a handy table laying out what is what.

It has a ton of voices, some awesome, some grating and some just plain bizarre.  It is a lot of fun to just play around with.  I really like this video by Gear Up because he goes through all the different Type settings and then just twiddles with the knobs so you can get a sense of how it changes the sounds.  Having messed around with the pedal for hours, I can attest to the fact that every sound in the video is generated only by the Bass Synth Wah. No other effects need apply.


I would say the same thing about the DigiTech Bass Synth Wah that I said about my flanger, simultaneously one of my favorite and yet least useful effects.  Probably the reason why I waited to get it until now.  As I've mentioned before, I play a lot of straight up metal, so some of the more overt functions of this pedal aren't of much use to me.  However, when you dial back some of the weirder effects into more subtle territory, I think it has a lot of potential for adding interest and utility to the old pedal board. Not to mention hours of fun just doodling around with the sounds it can make.
Posted by Bass Bottom Feeder at 3:06 PM