Lamb of God Returns to Killadelphia! 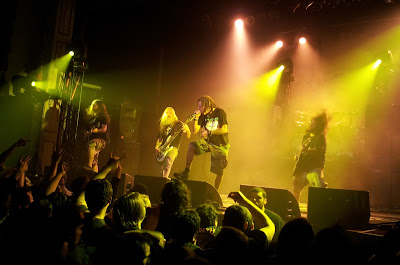 Best pic of the night. 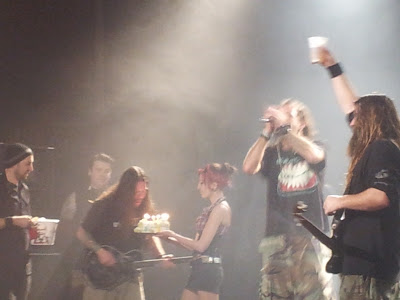 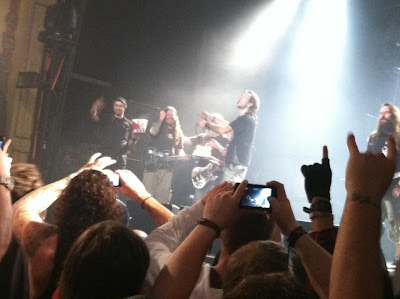 Apparently is was Willie's birthday Thursday night.
He is an old bastard, just like me. 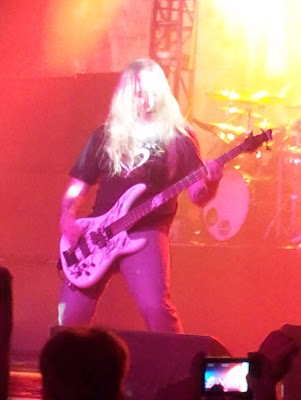 Some love for John Campbell holding down the low end.
I hugged him in a parking lot in Camden a few years ago.
Don't ask. 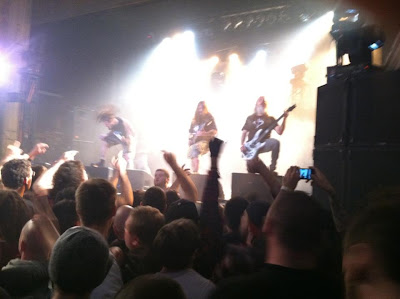 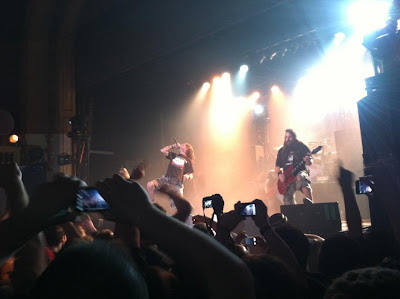 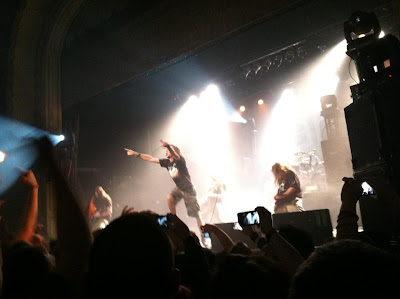 Generically awesome pics of Lamb rocking the house.
Lamb of God is just awesome live.  I don't know if it is their history with Philadelphia, the fact the they are so close to home or if they were just psyched to be back on tour.  They kill it in concert.  Kill.  I don't normally skip the opening acts, but weeknight shows are kind of a bitch that way.  But Lamb of God rocked hard enough for ten bands.  After they lay siege to stages in Europe for a while, they are supposed to return to the states. Do not miss them.
Posted by Bass Bottom Feeder at 12:50 PM 1 comment:


These guys came around with Amon Amarth when they toured the US in 2010.  Unfortunately, they were replaced by another band on the last leg of the tour that hit Philadelphia.  Death metal with folk instruments.  It takes a second for your brain to wrap around it, and you'll either love it or hate it.  I think these guys peg the balance between the two perfectly.  And their vocalists are all really good.  This is a tune of their upcoming album, and they put female vocalist Anna Murphy front and center in this song. Personally, I hope they rotate the singing duties just to keep things interesting.  They are touring the US next month, so if you dig them, check them out live.
Posted by Bass Bottom Feeder at 9:36 AM 1 comment:

In Flames & Friends Rock the Troc! 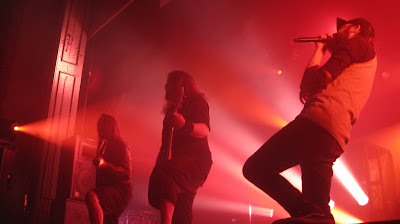 This week was a blur for some reason.  Probably because I went to a concert on Sunday night, had more beer and stayed up way later than is sensible with work the next morning.  But who cares?  Kyng and Veil of Maya sounded pretty decent, though I admit I was listening from the upstairs bar.  I don't have any history with Trivium, but they put on a competent show.  In Flames was great despite the fact that Anders sounded sick as dog.  He also confessed that they may have spent too much time at Yards Brewery earlier in the day.  His souvenir t-shirt seemed to confirm this story.  The picture above I stole from my pal over at Metal Mouth, who had the foresight to request a press pass.  You can check out some more of his pics here.  Catch the show if you can.
Posted by Bass Bottom Feeder at 4:06 PM No comments:


Concert time again!  Going to see In Flames tomorrow night, so I thought I would put up something off of their latest offering.  I missed them when they had to cancel Mayhem last summer.  They put on a really good live show.  Have a great weekend!
Posted by Bass Bottom Feeder at 10:12 AM No comments:

The State of the Pedal Board - Part 2

For a quick review, here is part one.  Now on to the rest of my pedal board as it stands now. 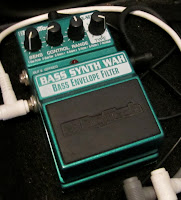 DigiTech Bass Synth Wah
I normally use this pedal as an auto-wah type envelope filter.  It is a lot of fun to mess around with and can do a lot more.  It also has an octaver as one of its effect types, so I could see trying this out in the #2 slot as a dedicated octave pedal as opposed to an envelope filter.
Pedal #6 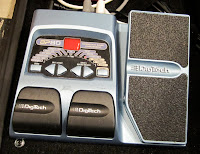 DigiTech BP80
I have this acting as a volume pedal since I don't have a dedicated volume pedal up front.  One tap away it is set up to change into a wah pedal.  And then it does every other crazy thing that a multi-effect does.   It could easily be set up to serve as a reverb or delay, should the need arise for any particular cover tune that might require it.
Pedal #7 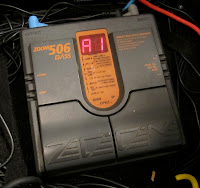 Zoom 506B
This is one I can't live without, and I have it doing something really boring.  Program one is nothing.  I leave it there when the song I'm playing wants more boom and less attack.  Program two is nothing but a "fat-wah" effect that is supposed to be controlled by an external pedal.  I don't have the external pedal, but what it ends up doing is adding an emphasis to the pick attack.  Program three is a low mid boost added to the "fat-wah" effect which gives the bass even more of a cutting edge.  I'm not sure what type of effect could replicate what I'm doing with this pedal at the moment.  Perhaps an EQ pedal?
Pedal #8 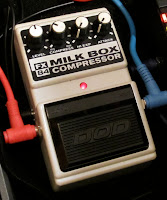 DOD FX84 Milk Box
I got this pedal to learn about compression.  The article I used as the basis of my foray into effect pedals recommends a compressor at the end of the chain to add back in any life that was sucked out of your signal by running it through a bunch of little electronic boxes.  I still am no compression expert, but basically it adds gain and sustain.  I leave it on all the time.
The Pedal Board 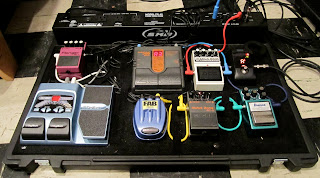 SKB PS-45
Everything is mounted on an SKB PS-45.  The board was a good investment.  I probably would have spent what it cost in 9-volt batteries by now.
So there is the first generation of my pedal board.  I deviated from the article at almost every turn, so it ended up treating it more like a guideline than a rule.  I think that tuner up front, compressor at the end and overdrive before other tone-shaping effects are all good things to keep in mind.  I'll probably start rethinking and tearing apart my board now that I've been playing with it for the better part of a year.  I have a pretty good sense now of what I do and don't use and what type of effects generate the kinds of tones I'm looking for.  I hope I've helped someone learn something.
Posted by Bass Bottom Feeder at 11:47 PM No comments:

I can't believe I haven't posted a Lamb of God video yet!  This one is a great way to usher in the Saturday Morning Music Video for 2012.  They have a new album coming out in weeks, and they are only playing six shows in the US before heading to Europe.  I got tickets months ago, but I think they are all sold out now.
Posted by Bass Bottom Feeder at 10:31 AM No comments:

Women on the Verge of a (Low End) Breakdown 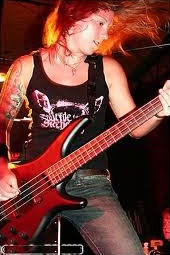 Jeanne Sagan - killing it for All That Remains
Just thought I'd share this article I came across over at Guitar World.  Its a nice sampling from across the musical spectrum of some noteworthy females who are holding down the low end.  Of the featured bassists, I saw Jeanne Sagan playing for All That Remains when they were touring for their Overcome album.  I had no idea they had woman on the back-up vocals until I saw them live.  No love for Jo Bench, though.  Maybe next time...
Posted by Bass Bottom Feeder at 10:09 AM No comments:

The State of the Pedal Board - Part 1

For anyone just showing up to Bass Bottom Feeder for the first time, the original intent of this blog was to document the assembly a (fairly) cheap and effective pedal board for bass.  The jumping off point for this exercise was a great article in Bass Player written by Bryan Beller over a year ago.  I have added it to the link bar on the right for easy reference.  I basically followed his suggestions regarding effects type and order because he is a consummate professional, and I am not.

So here is the state of my pedal board in its first iteration, using the pedal board primer as my guide.  I have eight pedals at the moment, so I'll cover the first four in this post. 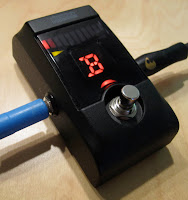 Korg Pitchblack
The Primer recommends a volume pedal with a tuner input to facilitate silent tuning on stage.  The Korg lets you tune silently because it mutes your signal when you turn it on.  I have a volume pedal later in the chain in the form of the BP80 multi-effect.
Pedal #2 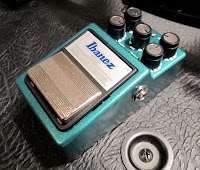 TS9B Bass Tube Screamer
Mr. Beller has an octave pedal in the #2 slot, followed by an overdrive in slot #3.  I don't have a dedicated octave effect, so I went right to the overdrive.  The Tube Screamer has been serving me well, but now that I have a better sense of what each effect type brings to the table, I have a better idea of what I might be looking for in terms of specific sounds.  Overdrives are my favorite effect for bass, and there are lots of them to explore. For me, the overdrive is really the foundation of my sound. Everything else is just enhancement/manipulation of that basic tone. 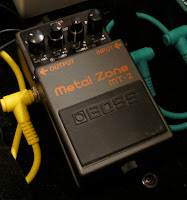 BOSS MT-2 Metal Zone
Distortion is next in line.  The MT-2 is a guitar effect, but it has a pretty cool fuzzed-out sound coming through on a bass, especially when you juice up your signal with the overdrive first. I like its overall sound, but it really kills the attack when you're down low.  Save it for big open notes, or when you are higher up on the neck.
Pedal #4

BOSS CEB-3 Bass Chorus
I have the chorus in slot four instead of another distortion effect.  I like chorus.  It adds a lot of depth without being all in your face.  Probably my most commonly used pedal after the overdrive.  Definitely has a better presence when it is used in conjunction with the Tube Screamer.
I'll do the back four some time soon.  I suppose a demo video might be in order.  I'll see what I can come up with.
Posted by Bass Bottom Feeder at 2:11 PM No comments:

Well this is it.  The Mayans say the calendar runs out this year. Not quite sure if that is the same as the world ending, but everyone seems to think it is.  I do believe that the herald of Quetzalcoatl's imminent return is Les Claypool in a lobster costume.  It's 2012 now.  If tragedy ever was coming, now is as good a time as any.
Posted by Bass Bottom Feeder at 10:23 PM No comments: